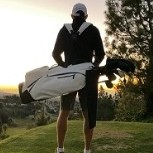 Honma Beres is all about lightweight luxury designed for low to medium swing speed players with very deep pockets. Pricing for a Beres driver can range from a low end of $850 for a 2-Star driver all the way up to $4,500 for a 5-Star driver.

Though the 2-Star is ironically considered “entry-level” by Beres (it did finish third in this year’s Most Wanted Super Game Improvement Iron testing), the line goes up to 3-, 4- and 5-Star levels. Just so we're clear, a full bag of 5-Star Honma Beres wares will set you back roughly $70,000.

With all of that said, we'd like to get feedback from MyGolfSpy readers. We're looking for two couples (yes, couples) to test, review, and keep two Honma 2-Star Beres drivers. This test is open internationally; right-handed testers only.

Testing and reviewing the Honma Beres 2-Star will be @Fjd and @Cory O: should be a fun test not only for them but as couples! 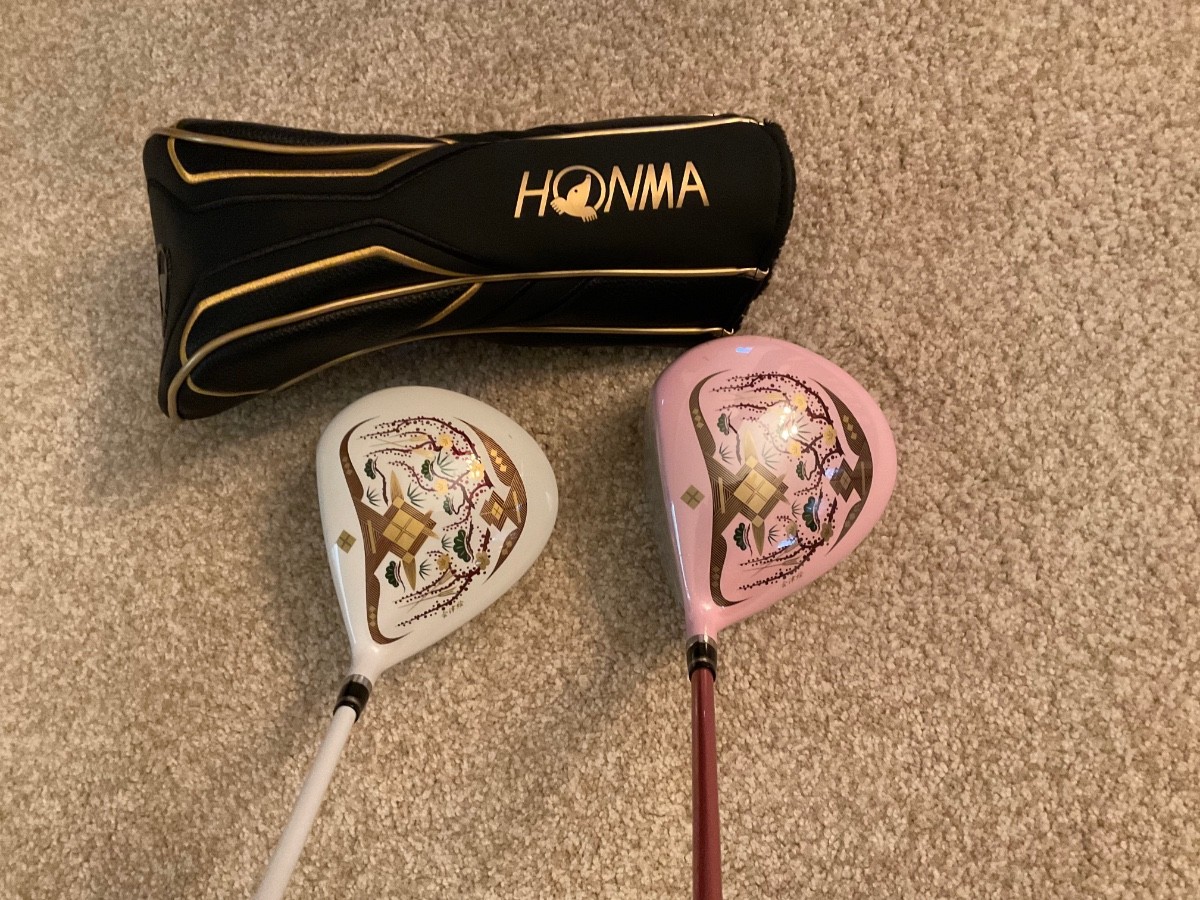 Our Honma Beres drivers just arrived and they are a work of art.  Almost too nice to hit.  Mens driver is on the left and ladies driver on right is a Honma Beres Aizu 3 star model.  In addition to being known for their renowned beauty and attention to detail in paint and finishing of the head, these Honma Beres drivers are also known for their superior shafts in delivering hi smash factors whereas the driver face is designed for Hi Cor and more ball speed.  Will have to check this out

Took my Beres driver out today for the 1st time and played only 4 holes in 47° weather here in upstate South Carolina.  WOW!!!  What a great club.  The ball seemed to stay in the air forever.  I was cold, somewhat stiff and not reaching my normal swg spd of 79 mph, I swung easy and the driver provided very good length and was exceptionally straight on a number of hits.  Looking forward to warmer weather and some 18 hole rounds.

As mentioned, we live in upstate South Carolina and play year around.  I am 80 yrs old and have been playing for 65 yrs.  Still shoot in the hi 70’s at times but mostly low to mid 80’s from 5500 yd forward tees. 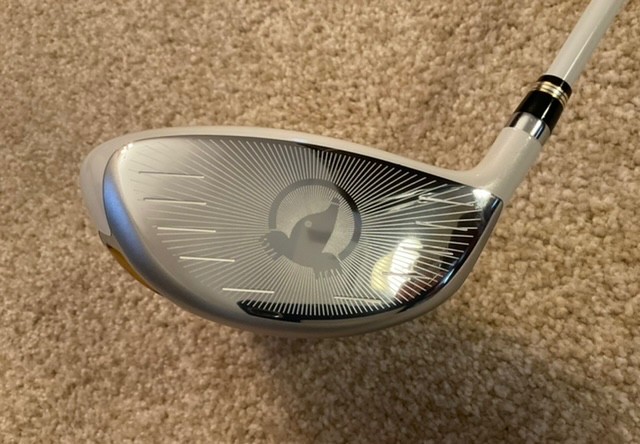 No golf the last week or so do to winter weather.

I'm going to start with an opinion I wanted to share, but didn't have it impact my star ratings. In this day and age, I think a lot of golfers are going to be getting their clubs delivered instead of getting it at a shop. Because of that, the first impression really starts with the unboxing. Based on this, I really hope that Honma has a different presentation for their Beres line to the paying customers as opposed to what was sent out for review. 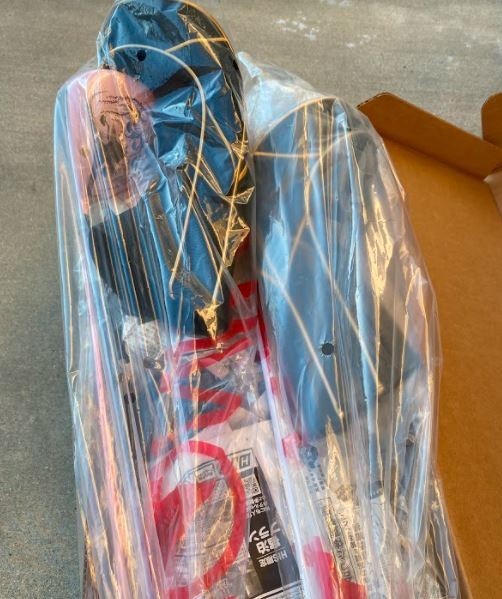 As you can see in the photo, the box received was a simple, unbranded brown cardboard packed with the clubs and Japanese newspapers. This all did fine to keep the clubs protected in transit, but if I had just paid ~$1000 for a golf club, I would have been very underwhelmed. I might also have high expectations as a PXG player as their unboxing presentation is second to none. While I decided to not dock any star ratings because of all this, I thought it all worth noting.

We'll avoid the obvious for a second and start with some more of the basics. This driver has a really classic shape to it and nicely proportioned. The look of size behind the ball would probably give plenty of confidence, but not offend the better players. Another note is that while the club has a draw bias we'll discuss later, it really isn't visible or obvious visually. 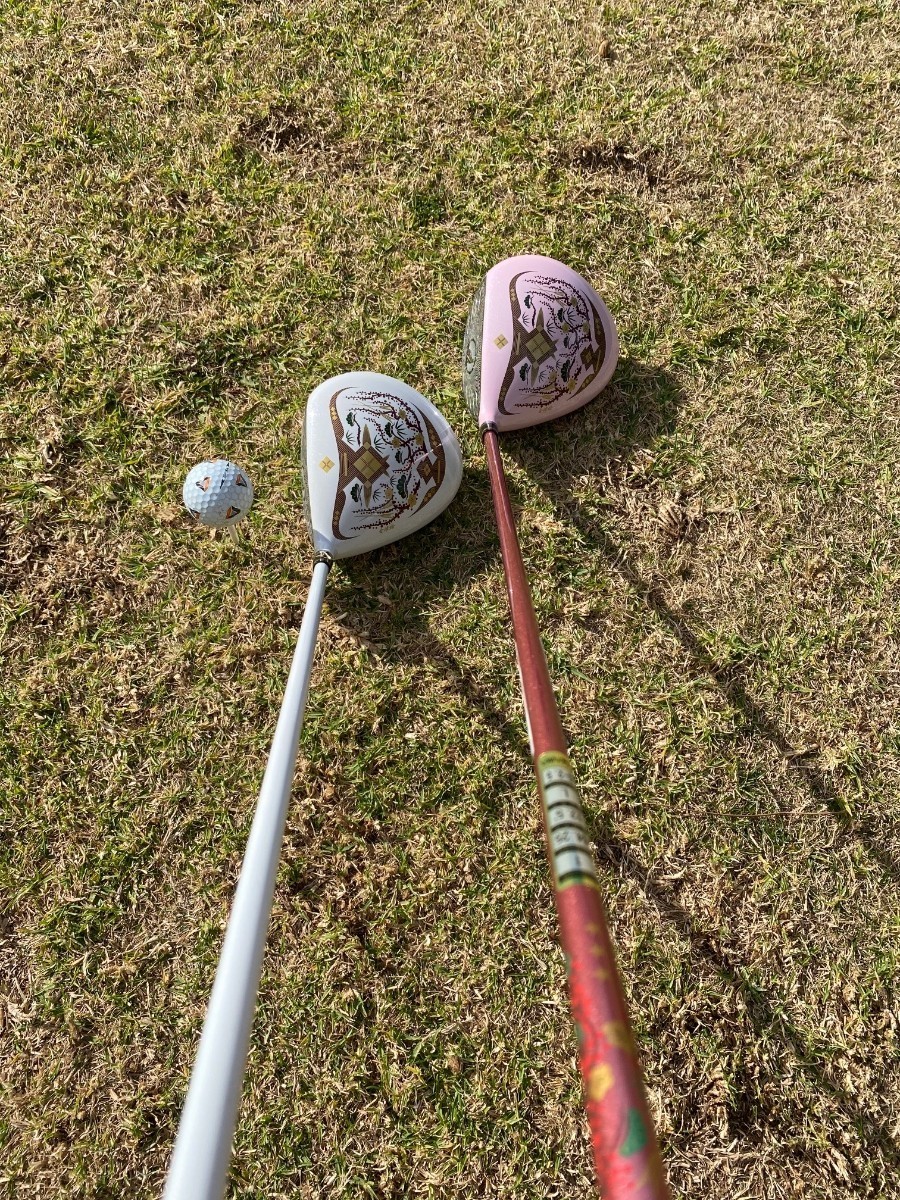 With the Aizu edition, the artwork on the crown and up the shaft is certainly the standout. Some might really like it, some may hate it or find it distracting. I was somewhere in the middle initially, but after a few holes with it, I no longer really noticed it and it didn't impact my ability to hit it.

Even if isn't something I would personally choose to buy, I still give the aesthetics 4 out of 5 stars because if you're looking to purchase a Beres driver, you're doing it because you want to be noticed. With the Aizu edition, there is no question that it'll be noticed (and commented on). Honma deserves some kudos for finding a way to make a club visually extreme, but in a way that their key clientele for the club will still enjoy given the callout to traditional Japanese artwork.

Wife Aesthetics (3 out of 5 Stars)

My wife generally agreed with everything above and thought the artwork was well done. What she didn't like, however, is that the ladies club came in a bright pink. From the Honma item page, it seems that the pink head is set for the 3 star driver option. Different colors (white, dark maroon, and red) reflect the 2 star, 4 star, and 5 star models respectively. These come color matched with the star-grade specific shaft and have different price points. There's nothing wrong with a pink driver head (just ask Bubba Watson), but her personal preference would have been something a bit more neutral like the other star-level heads had. 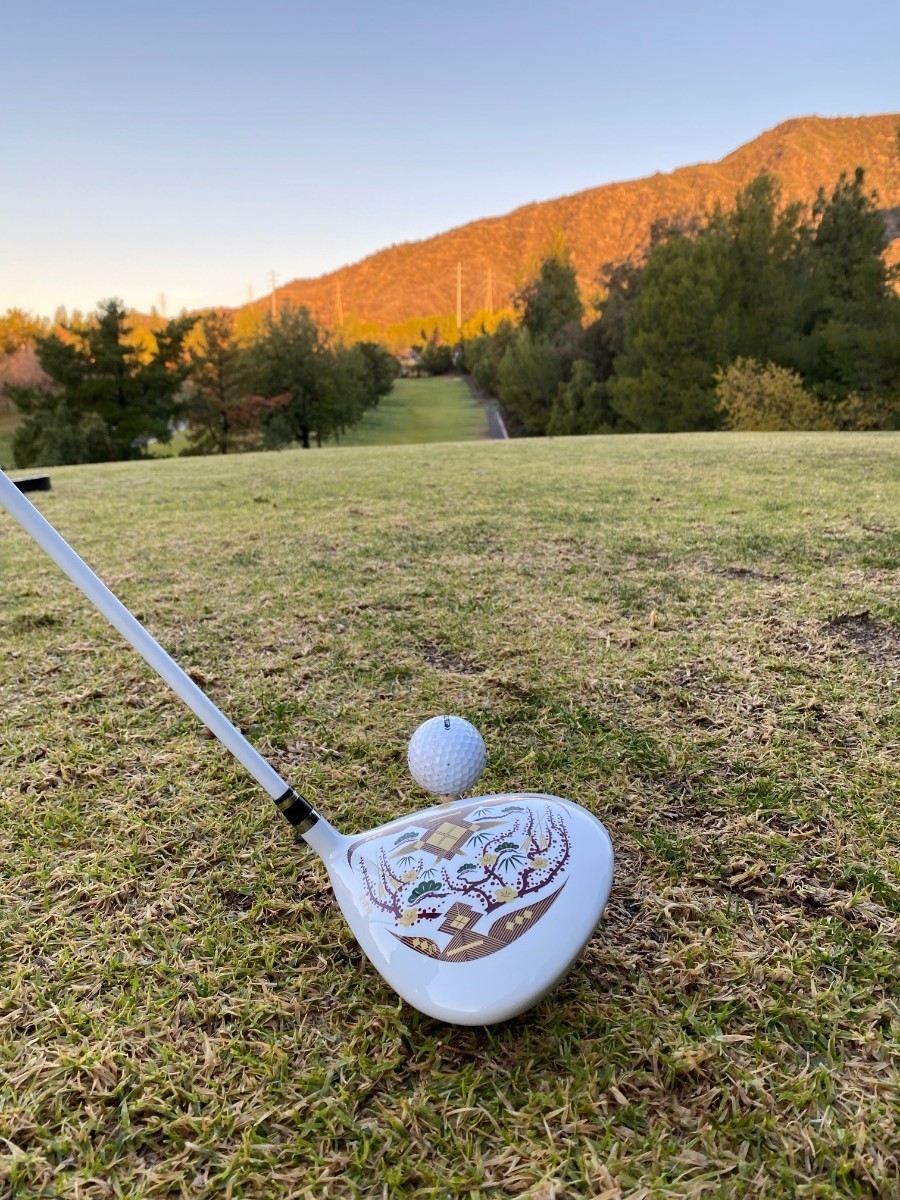 For both of us, our shared thought was that the club is obviously well-build and constructed with high-end materials. Say what you want about the price tag, but the quality is there. At impact, the club head has a unique "trampoline"-like ringing sound. I feel like the tone is similar to earlier generations of 460cc drivers, but not nearly as loud. It doesn't quite sound like anything else in the market today, but it's not unpleasant or distracting. The sound is relatively consistent across the face, so even mishits have a decent sound.

On the feel-side of things, the very first thing we noticed was the lightness. The club feels light in your hand taking it out of the bag and light through the swing. With the lightness and long length (46" for men 44.5" for women), the club also feels fast, producing a nice whippy sensation through the swing. 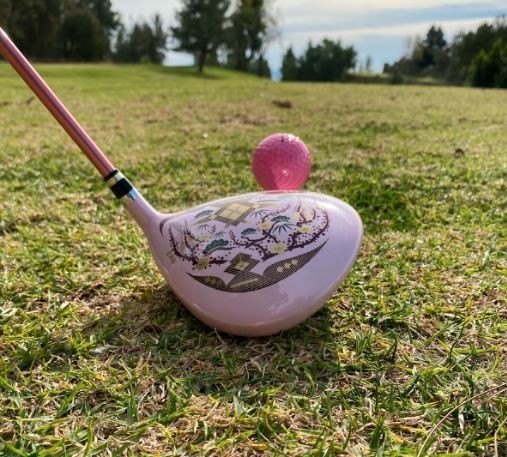 My wife is still a beginner and casual golfer, so she doesn't get as technical with the ball flight as I do. Her swing was significantly faster with the Honma, however, than it was with the PXG 0211z and had the potential for very long drives. In her opinion, though, this speed meant she felt more out of control and made it hard to gauge distance or accuracy.

Four stars for me, three stars for her, so averaging out to a 3.5

Here is where I struggle to decide how I want to grade out the Beres. Do I want to say what the score is for me or for who the club should really be used by? I can say without a doubt that I am completely the wrong fit for the Beres driver. I swing (just a bit) too fast, hit it too high, and have too much of a draw to begin with. Everything about the driver, however, was designed for someone with a more moderate swing speed, struggles with a slice, and could find more distance with a higher launch. Statistically speaking, the average customer looking at the Beres is much more likely to match that description than my own. 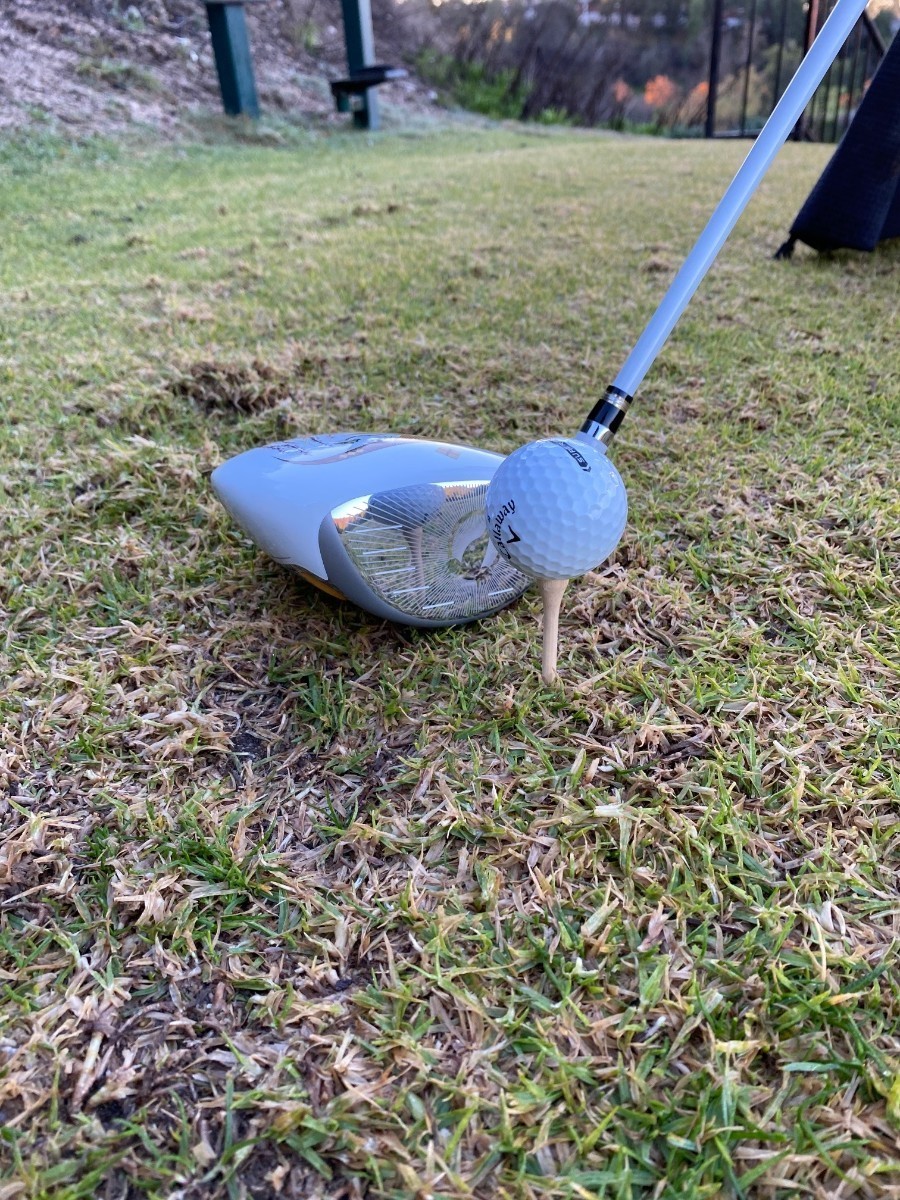 That said, even for being the completely wrong player for it, I could still play it. Once I got used to what it wanted to do, I generally didn't have a problem with it out on the course and produced scores similar to my gamer. Even if it wouldn't be my choice, if I had to play the Beres, I could do it happily. That probably says something. All said and done, I'll give three stars on-course for me personally and four+ stars for the golfer I picture should be playing it. Average them out to 3.5

My wife, however, is a relatively good swing match to the Beres ladies driver. She can swing it faster than her gamer and hit it higher. If she decided to play it consistently, I'm also confident it could be just as forgiving as the 0211z, a driver purpose built for forgiveness first. But she's a casual golfer and doesn't like the pink, so she wants to get back to her gamer. I'll grade her on-course score as "incomplete."

In my opinion, no one is going to buy the Honma Beres Aizu driver because they'll swing it 2mph faster, hit it 5 yards further, and take some turn off their slice. They're not going to buy it for the sound or feel off the face. If I had to take a guess, I'm guessing the majority of the buyers won't even hit the club before making their purchase.

Because of that, I don't really think Honma HAD to make this latest version of the Beres line a particularly good driver, but they did. In fact, for the right type of golfer, the Beres could very well be a great driver. That golfer wouldn't be giving up performance just for the status, so I respect Honma for not just phoning it in, but making a good golf club.

Additionally, with the Aizu line specifically, I also like the willingness to turn the volume up to 11 on the "stand out from the crowd" level. No one will mistake the driver for anything else and buyers almost certainly will be asked about it out on the course. For the average Beres customer, that might just be the whole point. For that the Beres Aizu deserves 5 points.

I'm not going to comment on the Beres price. First off because I have an Autoflex in the bag (I didn't pay full price for it, but still) and second because if you are seriously considering the Beres line, then the dollars are probably no longer a primary consideration. If you wonder if it'll be "worth it" moneywise, then there's a good chance it won't be.

That said, for me and my wife, the Beres Aizu drivers are firmly in the "trade it" zone. For me it's because the club is exactly the wrong fit for my swing and there's no way to adjust it to get the club in a place it would be. For my wife, the simple answer is because it's pink and she doesn't want a bright pink club in her bag.

Are you a brand conscious country club member who wants to stand out from the crowd? Do you have a slower swing, struggle with a slice, and could use some help getting the ball up the air? The the Honma Beres Aizu driver might just be the club for you. Especially if that standing-out from the crowd part is at least as important if not more so than the actual performance.

Nobody is going to be rocking a Beres Aizu on a pro tour any time soon and it's not going to be a good fit for everybody. It's not a true competitor to the latest Taylormade or Callaway as those are golf clubs. The Honma Beres isn't (just) a golf club, it's a fashion and social statement. It just happens to be one that hits golf clubs pretty damn well. 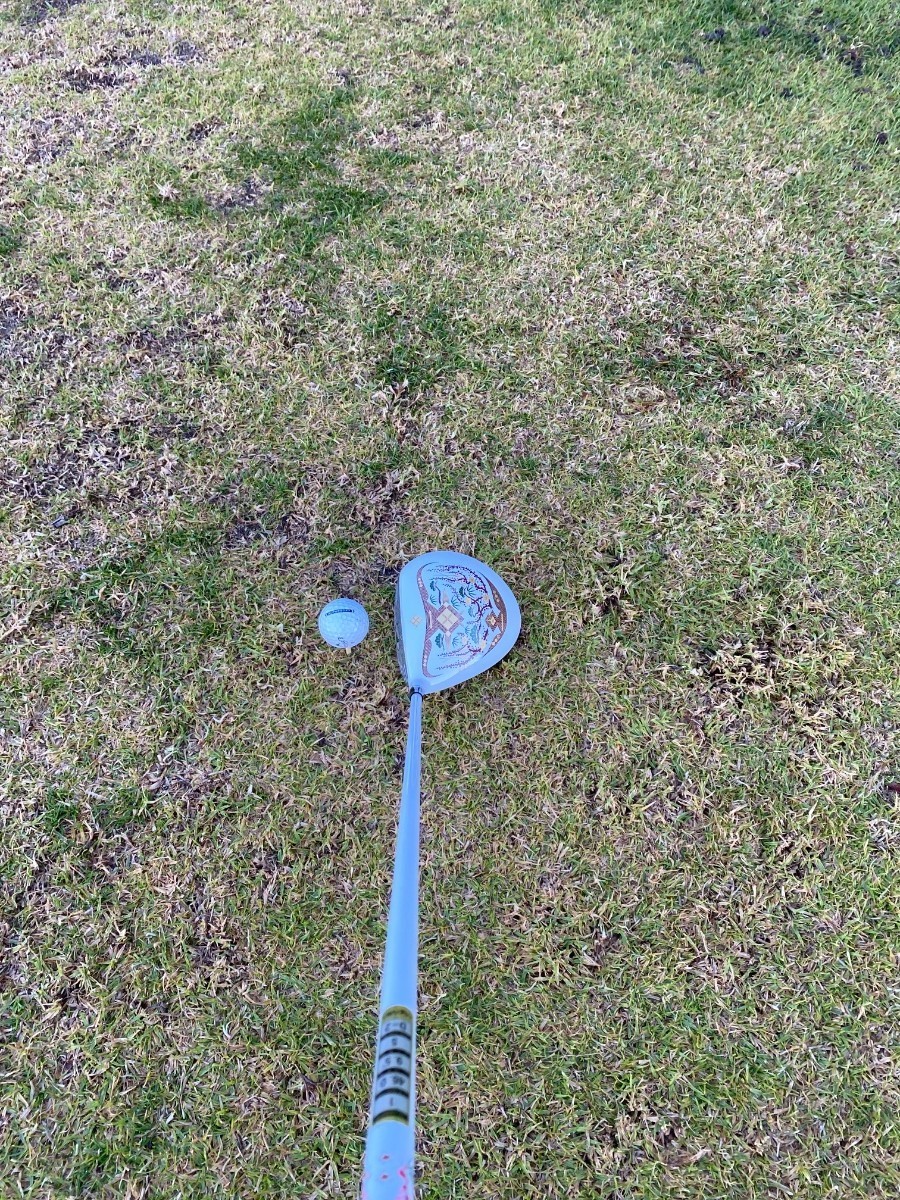 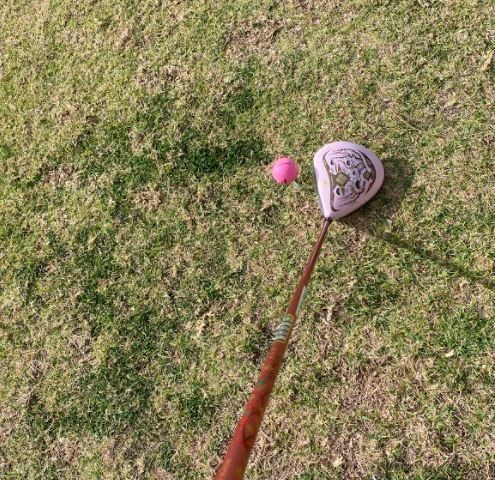