REVIEW PART 1   First off let me say thanks to MGS and The Hogan Company I was expecting these to show up at anytime. One of the other reviewers recieved theirs and when I got off work I sped home.

NOTE: 3PUTTPAUL IS TECHNICALLY IGNORANT! APOLOGIZE FOR THE MIS-PLACED IMAGES. Not sure what I'm doing wrong.  I have place markers in the text to which pictures I'm referring to. Also double click the 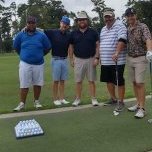 STAGE 1   I was introduced to golf when I was very young after my dad came back from Korea. At that time me and golf did not get along very well minus the driving range where I tried to hit it as fa