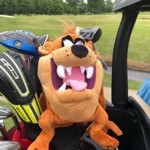 Nope not wearing no collarless shirt. I'm waaaaay too sexy for that [emoji378]     Sent from my iPhone using MyGolfSpy

I wonder why so many people think that golf is an elitist a**hole game/sport???   I don't care what anyone wears to play golf, as long as it's neat and clean.

I can fill it out, and it's not pretty!