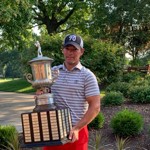 I will say that I take calculated risks and try to make the next shot as easy as possible.  That doesn't always mean going for it on a par 5.  Shanks, your par 3 scoring is it because of a poor chip o

At my course I am basically a 10 HCP.  I know the course well.  I know what my limitations are... "A man's got to know his limitations".  😉  You all know the factors that have to be considered; they'v

Lifted from a Golf Sidekick YouTube video -- I had a few simple thoughts going through my head during my first round of the year Sunday: 1) Setup my shot play so that a good shot is good, and you