Most Wanted Mallet 2019 - Not that surprised 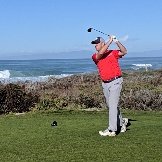 If anyone hasn't read the comments on the article itself, you're missing some real gems. Bobby Locke gets brought up for heaven's sake #topical Sent from my Pixel 3 using MyGolfSpy mobile app

Hey let me tell you sumthin. Sam Snead was the best damn driver of the ball the game has ever seen and he NEVER used no 460 cc G4M5BigBertha's Fat Ass piece of titanium crap! Every time I see some hac

....just goes to show that you don't have to spend 350 dollars to get a good putter.