PXG Driver...Deal too good to pass up? 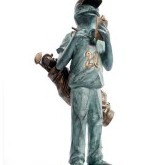 Played 3 quick holes this morning after getting my membership and cart shed. I was gonna play more but the cart seemed to be dying. I plan on going out again tonight and first thing in the morning bef

I went through a fitting at PxG last year for the Gen 2 driver.  It was neck and neck with the G410+ I Had.   So I definitely didn't see it being worth the $595 for basically the same numbers But

It is definitely a killer deal. I love mine and don’t see it leaving the bag anytime soon. To put that into perspective for those that may not know me, over the last 2 years I have owned or hit basica