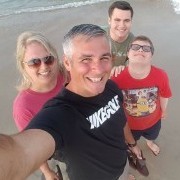 Brady may be an 8 but he’s not reverse-bagging it. Anyone who plays Medalist and shoots their handicap should frame their card.

I enjoyed that a whole hell of a lot more than the first one. The mics on the players and the gopros on the carts were a good touch. The best part of it all was the commentary by JT though. He might b