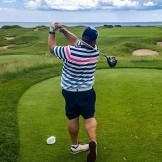 By TheBigBobRob, June 30 in What's In Your Bag?