Damn!  I had not heard about this.  We have a Bushnell account too at the course.  I have a sorry feeling this is going to be the scene in my office when more info on it is available. 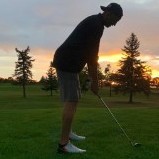 Just got mine in. I've had one longer range session and one short one and about 5 shots with driver into my net. So far, it seems pretty decent for carry distance, so so for total distance and some of