Cantlay is going to be an assassin on the Ryder Cup team... The decel putting does your opponent no good when judging speed... He doesn't talk to anyone while he plays... Ice water in h

I’m over all of the anti-Bryson sentiment everywhere on social media. A fellow Pro offered people beer if they would heckle BD. THAT’S who should be called-out! But, no. BD is a little eccentric, diff 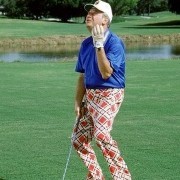