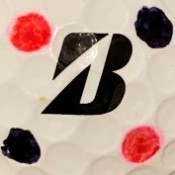 I occasionally get to play some of the fancier courses here in Utah through my job.  Next week I get to play the Painted Valley course at Promontory (link).  I'm pretty excited.  It's at a pretty high