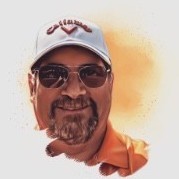 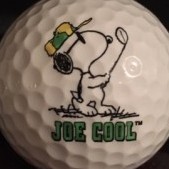 Ever wanted to contribute to the data MyGolfSpy collects over the course of the season?

Welcome to Testers Wanted where we recruit readers like you for objective feedback on products that roll into HQ throughout the year!

Earlier this year, Shot Scope released a suite of stat-tracking accoutrements  aimed at the golfer that wants all of the data but would rather not wear a watch. Generally, it's the same player who prefers to reserve precious pocket space for tees, ball markers and divot tools rather than a cell phone.

With that, we need testers like you to assess and report back to us at MyGolfSpy!

New to the forum? Want to increase your chances of being selected for testing? Here is a link to a guide which lays it all out for you and will allow you to know exactly how, why and who we select for testing: How To Become A Tester

I would like to thank My Golf Spy and Shot Scope for the opportunity to be a tester for the Shot Scope Pro LX+. THis is my second testing opportunity for the Forum. Last year I tested the Evnroll ER11v putter.  I was interested in this test as I had a free trial of the Arccos Caddie last year for being a Ping club owner. I also have a Mileseey range finder. I am really hoping to find something that just works and offers good value for money. I have been an off and on golfer since my mid-20s, after getting out of the Army in the late 80s. I was born and raised in the San Francisco Bay Area and grew up across the street from a golf course, but I never played the game as a kid. I once came home from school to find a broken bedroom window and a golf ball on my bed. That golf course was Sharp Park Golf Course in Pacifica, CA. It was designed by Alister MacKenzie. The first course I ever played a full 18 holes on though was Harding Park. That was well before it was managed by the Arnold Palmer Company and before it became a TPC site and host to the PGA Championship.

My professional life started in the US Army where I was trained to maintain and repair medical equipment. I got out of the army and joined a medical imaging equipment manufacturer where I worked for 31 years. That company had moved me all over the U.S. My first move took me from California to Connecticut for several years. It was in CT that I recorded my one and only eagle. It was in league play, and it was a pitch in on a par 5 on the 9th hole at Grassy Hills Country Club in Orange, CT. Work then moved back across country to the Seattle area. There were several courses I enjoyed playing in Washington. Walter Hall in Everett, WA was my home course. In 2018, my wife and I moved cross country again to be closer to family. This time to Central New York, just outside of Syracuse. In 2019 my job changed and joined the ranks of semi-retirement which now allows me more regular golf, weather permitting as I am fair weather golfer.

My current home course is Radisson Greens in Baldwinsville, NY. It is an 18-hole par 72 course at 6360 yards from the white tees. The course was designed by Robert Trent Jones, Sr. I have a Monday through Thursday membership there and I get out a couple of times a week. The course is very challenging, but I love the layout. It is tree lined and tight in spots.

I play golf because I enjoy being out walking the course and if good scores come then it is a bonus. I also am an equipment junkie. I remember reading Golf Equipment Magazine (one of those paper things that was out before the internet). If I had the means, I would probably be a putter collector. I just love the aesthetics of good golf equipment I am a fan of BB and F Co. ferrules and installed some on my wedges. I also have a small collection of third party designed headcovers, mostly Rose & Fire with a couple of Scotty Cameron’s thrown in for good measure.

On the equipment front, my first set of clubs was a Wilson box set with wooden woods. From there my bag make up has changed but my woods have seen the most changes. I have rotated through a lot of TaylorMade Divers and fairway woods, but I eventually switched to Ping. My Ping G400 Max was the first time I was fitted for a club, and I have yet to find a reason to change it. My iron history is small starting with Dunlop DDH II, TaylorMade Super Steel. My irons are Ping G25 4- UW (I won these through work). I did have some PXG 0211 irons but found that the Ping G25s were better in the wet conditions of the start of the season and have not switched back. Earlier this year I had a Ping G410 Crossover 4 in my bag and during a round I noticed the head was twisting on the shaft so off it went to Ping for repair. It has since been returned but I am hitting the G25 4 iron much too well to remove it from my bag.  The PXG clubs entered my bag mostly because of price. The For Heroes Program PXG offers was just too good of a deal to pass up. The PXG 0341 3 wood is the best performing 3 wood I have ever had in the bag. My wedges have either been Cleveland or Callaway. Now I have two Callaway wedges in there. A Mack Daddy CB 54° and a Callaway MD3 58°. My putter history was primarily Anser style putters. They include two TaylorMade putters the last being the Rossa Daytona 1. I gamed Odyssey Metal X Milled #2 but I did not like the feel of it. It was a My Golf Spy review and Most Wanted win that led me to trying Evnroll putters for the first time. I ended up with a mallet putter for the first time when I purchased the ER7. I was initial attract to the idea of a higher MOI putter but really like the feel and consistency of the roll the ER7 gave me. I tested the Evnroll ER11v putter last year for the forum and that putter has found permanent hope in my bag. Evnroll ER11v Official Review

I am also a member of the “Pushcart Mafia” with a Clicgear 3.5+ pushcart. This probably the single best golf accessory item I have ever owned. 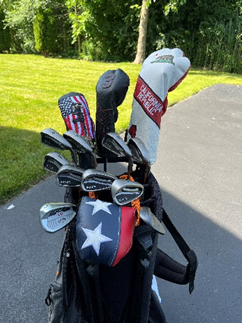 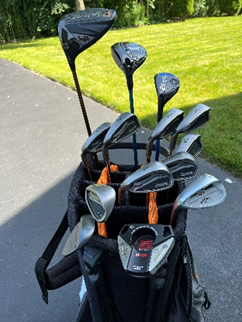 What’s in my bag?

Wanted to say upfront thanks to the mod team for selecting me to test this product and to Shot Scope for providing the units for us to test.    I’m Chris and live in Newport News, VA; which is about 20 minutes from MGS headquarters.   I have been playing golf on and off since I was a teenager (I am now 56) and prior to actually getting out on a course I remember getting my hands on some clubs as a preteen with my neighborhood friends and hitting balls in a cemetery near the house where I grew up.  I started playing on a regular basis in about 2000 when a friend invited me to play in his weekly group.   The group has shrunk in size since then but I still play with a few from that group and play in my company’s golf league.   My game has gone up and down through the years with my handicap getting as low as a 4 and is now probably about a 9 (guesstimate).   I am generally a huge golf junkie and love learning about products and all things golf which is why I volunteered my time to be one of HQ’s most wanted testers.  Being a most wanted tester lets me hit all the various clubs on the market but also lets me get access to see and touch lots of unique products in the golf world.

The Shot Scope PRO LX+ is an interesting product as it is really three products that have been packaged together:

The shot tracking aspect of the package is probably what interests me most since this is will be my first experience with automated stat capture.  My prior experiences have been cumbersome paper based or requiring me to pull my phone out of my pocket for every show so I am very excited to see how easily the tagging feature is and how it does at capturing all my shots and see if my personal assessment of my game lines up with what Shot Scope indicates.  This feature alone will probably be the key contributor in whether the product stays in the bag.

Some of the things I will work through are the various claims that Shot Scope makes like startup/course identification time, does slope calculation really provide meaningful information, rangefinder optics and accuracy, the various stats that it captures, and most importantly the battery life of the H4 unit since it becomes more difficult to track stats if the device can’t power on.

That’s a quick intro about me and what I am hoping to learn, but these reviews are done for you the MGS readers.   Leave comments about what interests you with this product and if possible, I’ll give it a try and get you the information you need to make your purchase decision.