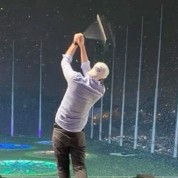 I agree with CNOSIL.  Start line was the key for me.  I spent the winter on a 10,000 putt challenge and my AH HA moment was when I found that being able to roll a ball down a 48 inch long 1 inch wide

It depends on the person.  For me I wanted to understand the putting stroke and how putter designs influence the strokes.  Basically all the nitty gritty stuff.  I found a good putting specific coach

There are a couple of online Strokes Gained Putting calculators.  All you need to enter is the first putt distance and the number of putts for each hole.  The baseline is the PGA Tour averages from Br